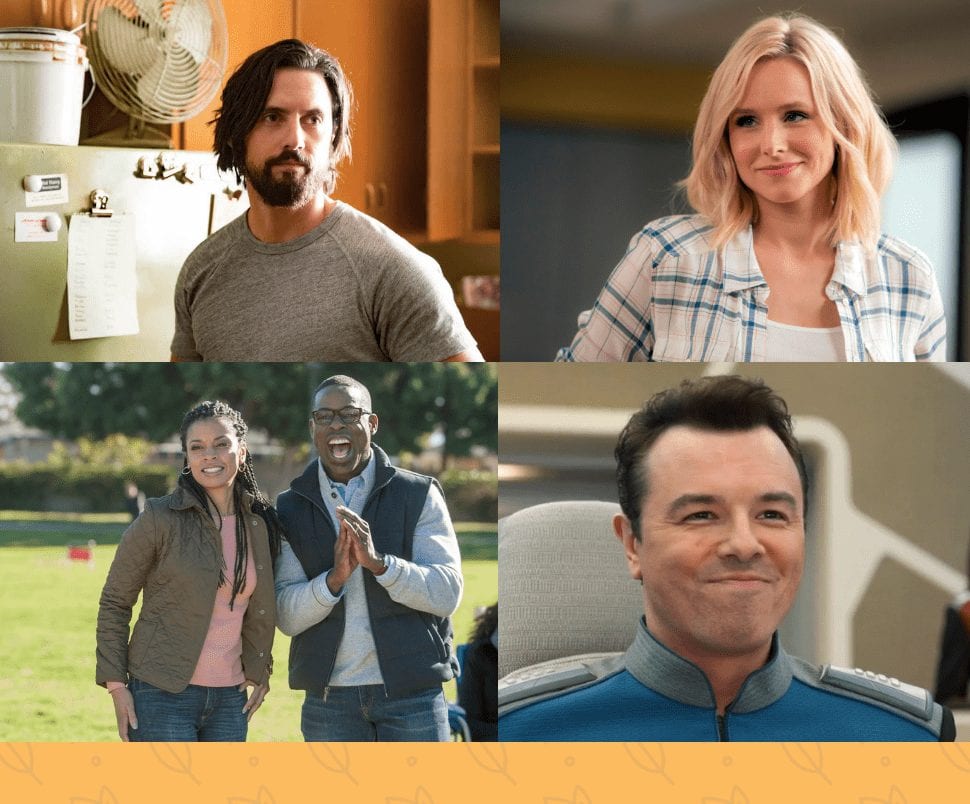 Fall is finally here! Fall months usher in Halloween preparations, pumpkin spice everything, apple cider, cozy sweaters, cinnamon flavored candles, and for TV lovers, the start of fall shows. This fall, old shows like Grey’s Anatomy, Scandal, or Narcos kick off a new season while we have some newcomers like The Orville and The Good Place. This is a list of recommended shows to help you get started on a carefully thought out binge watching adventure.

The Good Place is freaking hilarious and Kristen Bell is a gift to us all. This comedy follows Eleanor Shellstrop (Kristen Bell) as she finds herself in The Good Place after dying. She learns that there’s also a Bad Place where terrible people (and those who wear fedoras) end up. The storyline is adorned with pun after pun, witty banter, and hilarious one-liners. It’s a light-hearted comedy that delivers.

The Orville is created by Seth MacFarlane starring Seth MacFarlane so yeah, get ready to laugh your heart out. It’s set in the distant future with space exploration, flying cars, and inter-species-alien hookups. The Orville has amazing CGI space exploration with a storyline that has something for both sci-fi and comedy lovers. Not many sci-fi comedies out there with this level of authenticity. I highly recommend.

This is another show from the Marvel universe. If you love superheroes or you’ve read the comics then hurry up and start watching this. It’s a couple of episodes in and almost everyone on it so far has a cool superhuman ability. It also stars Iwan Rheon aka Ramsay Bolton from Game of Thrones so that’s something to look forward to.

If the Trailer is an indication, then White Famous is going to be hilarious. It’s a comedy set in Hollywood and produced by the same people who produced Californication. It also stars Jamie Foxx. Keep an eye out for it.

Dynasty is a remake premiering this October. It’s about two wealth family feuding with lots of infighting within the families as well. It’s lots of drama, affluent display of wealth, scheming, betrayal, expensive toys and expensive shoes. If you loved Revenge you’ll love this.

This is Us truly embodies its name because it is all of us. I haven’t been so moved by a TV show as I have with This is Us. This show is wholesome and therapeutic and shows the intimate occurrences of life, conflict, and relationships that we all deal with. It’s deep, bare, authentic, soul-wrenching, and will leave you sobbing.

Narcos is a Netflix show and it’s worth signing back into your ex’s Netflix account to see. Narcos tells the story of the 1980s drug war in South America, the birth of the Medellin and Cali Cartels, and Pablo Escobar. The narration is compelling, acting is superb and the production is worthy of repeated praise. Narcos makes its characters so complex and compelling you find yourself rooting for the bad guys sometimes. It’s a psychological drama in its own right.

Jack Bauer. If that name means anything to you then I bet you are already feeling excited. Designated survivor is a fast-paced political drama starring Kiefer Sutherland (from 24) as POTUS. The show kicks of with some serious drama that keeps you on your toes and also stars fan-favorite Maggie Q from Nikita.

Grey’s Anatomy is on its 14th Season. It’s basically the mother of all old-timey shows and part of the TGIT trifecta. If you don’t watch it you’ve probably heard of it anyways. Like ER, Scrubs or House, Grey’s Anatomy is a hospital drama with charismatic and funny doctors, interesting medical cases and compelling storylines. If you’re a fan, the new season is already some episodes in and if you’re a first timer with gazillion hours to burn then this is a really good one to get started on.

Speaking of TGIT, this is the final season of Scandal. Fast-talking, always strutting, power-wielding Olivia Pope is at it again but this time she’s at the highest echelon of power. With Mellie as POTUS, it’s a girl power team-up that we’ve all been waiting for and the escape from reality we all need.

Happily Ever After: The Single Girl’s Rant

Plaid On Trend: How to Style the Check Print