A lot of responsibility and stress come with adulthood. Paying bills, progressing at work, maintaining a social life, and laying a strong foundation for the future — to name a few.

In dealing with the surmounting pressures of adulthood, it can become difficult to remain calm and assertive when communicating in the different areas of our lives be it at work, in relationships, and with parents and other family members. 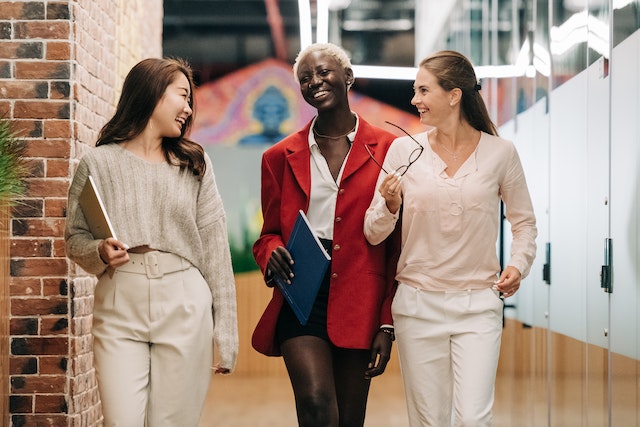 At Clever-ish, we understand that adults need certain key skills in order to thrive and grow. Mastering assertiveness can help a person to thrive and navigate other areas of their lives. Read on to learn how to be assertive yet calm as you navigate different aspects of adulthood and the different situations in which this communication style can be fundamental.

Assertiveness is a style of communication, and it is one that can be learned or improved upon. There are many different types of communication. In order to be confident when communicating your wants, needs, and thoughts it is important to be assertive.

Being calm and assertive as an adult is also important in order to implement boundaries. Boundaries can be difficult to enforce in social and work situations, and most of us can think of a time that they relaxed on their boundaries and regretted it later. Ultimately, boundaries are crucial in order to maintain healthy relationships and work/life balance.

How to be a Calm and Assertive Person

In order to become a calm and assertive adult, it is important to first assess your communication styles. Do you find you often put your needs over others, surpassing boundaries to the point it could be considered rude, or even bullying? Or are you often referred to as a “pushover” and put the needs of others before your own? Some people have moments in which they can be the former, aggressive in their response, or the latter, passive.

Assertiveness involves assessing and considering your own needs, while also finding a compromise or phrasing it in a polite way.

In order to remain calm, it is essential to practice breathing exercises such as Lions Breath or meditation. Calmness goes hand in hand with assertiveness, but often requires putting in the groundwork such as consistent mindfulness, relaxation periods, or exercise.

How to Remain Calm Under Pressure and in Difficult Situations

Often we just need a moment, before we react. According to evolutionary psychologists, humans have evolved to react quickly in order to survive. This was helpful when fighting off lions, but in the modern world quickly reacting in a conversation or sending off an email before thinking can have its drawbacks.

Perhaps you agree to have dinner on a night you had planned to relax, or you take on an extra work project when you have no time. This agreeability probably stems from some survival needs. On the other extreme, perhaps you react too quickly or too aggressively to a perceived “threat”.

To avoid this, and remain calm and assertive in difficult situations, prepare certain phrases to buy time or to politely excuse yourself such as “Can I get back to you on that?”, or “I’m sorry, I need to think about this so I will get back to you later.”

If you are alone, take deep breaths and count backward from 10. Remember that reactions can be controlled and proceeding in difficult situations is always a choice. Take note of what outcome you want or need, and how to assert that without being passive or aggressive.

How to be Assertive as a Woman

When it comes to being assertive, both genders have different experiences. Unfortunately, assertive women are often perceived negatively compared to men, meaning that assertiveness is more expected and accepted in men. assertiveness involves gender biases that mean assertive women are often perceived negatively. A Whitepaper Study found that despite exhibiting similar assertive behavior in similar situations, women were referred to as “bossy” more than their male counterparts.

On top of this, another study about the assertiveness gap between genders found that women were less likely to be assertive than men in school and university. In the educational setting, this study found that women answer fewer questions, and alter their language to seem “agreeable” such as apologizing for not understanding.  All in all, women have to balance on a tightrope in order to express themselves authentically, without being labeled as bossy. Here are some tips on how to be assertive as a woman:

Watch How You Phrase Your Ideas

Women have a tendency to make themselves small in both their body language and verbal, often reverting to terms such as “I think that…” or “I feel that maybe…” Terms such as these can be deemed weak and uncertain. Instead, try to use language such as “this is the best idea…” or “I need you to…”. On top of this, ensure you are direct when you speak and get straight to the point.

As Chimamanda Ngozi Adichie said in “We Should All be Feminists”, “We teach girls to shrink themselves, to make themselves smaller”, according to Adiche, this was in order to avoid threatening “the man”. Either way, a lot of women subconsciously hunch their shoulders, cross their arms, and avoid eye contact. In order to be assertive as a woman, ensure you have good posture with your shoulders back, and maintain eye contact. Don’t be afraid to take up space!

No matter what the situation, never be afraid of saying no. If you feel uncomfortable with an opinion or a request, then just say no. Women are often dubbed as “pushovers” and “people pleasers”, and social psychologists, studying gender differences say that women are more likely to say yes to things, not because they want to, but in order to be agreeable. Often, women don’t need the extra workload or commitments, so in order to be assertive, it’s important to learn when to say no, so that you can remain calm in all areas of your life. Saying no will prevent you from stretching yourself across too many projects or commitments, and will maintain your aura of assertion and calmness.

How to be Assertive in Relationships

Ultimately, it is up to us to communicate our wants, needs and desires to our partners. In order to master an assertive communication style in a relationship, it’s important to check in with yourself regularly and ask how you feel, and then ask how your partner feels.

To be assertive and calm in a relationship, you need to have a constant flow of communication with your partner, which involves discussing your wants and needs and your boundaries. It is important to avoid passive-aggressive communication. Remember, no one can read your mind so it is up to you to say what you are thinking.

How to be Assertive at Work

While it may seem assertive to tell someone what you want them to do, it can also appear aggressive. Asking someone to do something opens the conversation. If it’s a subordinate, and it’s up to you to explain to them how a task should be completed, that involves “telling” in a direct but polite way. Whereas if you are interacting with peers and brainstorming new ideas for a project, or you need them to pull their weight on a joint project, it’s better to ask for their help, or their ideas too.  This is important to avoid further conflict, and to ensure that all parties are in agreement. Remember, being assertive is not just about saying what you want, it’s also about respecting the opinions and needs of others.

The best way to be assertive at work is to be open, honest, and direct about your opinion. Don’t just hint at what you think, say it very clearly, but remember to always remain respectful toward others.

It’s Not Just About What You Say

Body language is very important when being assertive at work. To be assertive and calm, ensure that your face is relaxed, you maintain eye contact, and good posture, with your shoulders back. Balance your body language so that you seem open and confident, rather than aggressive.

Be Proud and Accountable

An assertive person will take pride in their accomplishments. Be accountable for your mistakes when they occur. It is also important to hold everyone to this standard and make your colleagues accountable for their mistakes.

How To Be Assertive With Your Boss

On top of being assertive at work, it is important to be assertive with your boss, too. When being assertive, you are standing up for your beliefs while also respecting others. Therefore, it may be necessary to speak to your boss in private, and to do so in a calm manner.

You should also recognize if your boss is a bully. If this is the case, be sure to judge the situation properly and either ask to speak to them privately and explain anything you feel uncomfortable about, or seek help and advice from the HR department or another superior you can trust.

If you feel as though your workload is increasing as are your outside of work hours, be direct about it. Explain the situation to your boss, in a calm but assertive manner, and they should take a step back and ease your workload. If they don’t, then be firm and say no.

How To Be Assertive If You Have Anxiety

For many, the thought of being assertive in any situation can conjure feelings of anxiety. Accepting and communicating our opinions, wants and needs can make some people feel uncomfortable.

Yet, a 2016 Study found that being assertive can actually reduce anxiety levels, and it can also build self-esteem levels. Ultimately, being assertive creates a relationship of respect, which will in turn reduce the chance of conflict. Being honest about your feelings, and a lack of conflict will in turn lower levels of anxiety. Here are some tips to be calm and assertive if you have anxiety.

Don’t let your anxious mind overthink every possible outcome. Identify what it is you need to be assertive about, (whether it’s a feeling or something you want to change) and be direct about it. The more direct you are about what you need to discuss, the easier it will be. There is no point hinting at what you want, just say it openly and respectfully.

Whether you are overthinking before or after the assertive interaction, remember that being assertive is healthy. Being passive at work, in your relationships, or in day-to-day life is actually more likely to increase anxiety. Being assertive and honest about your wants and needs to yourself and others will decrease your anxiety in the long run.

After the conversation, take deep breaths to calm yourself and remind yourself that you did it, and it’s over now. Reflect on the conversation, perhaps write down what went well and how you felt. And then simply push it out of your mind until you have an answer or a follow-up conversation.

10 Ways to Get Over Winter Sadness and Moodiness

Wantrepreneur: Advice For Every Undecided and Young Entrepreneur