Bestselling author Aimee Molloy’s much anticipated second novel Goodnight Beautiful is a psychological thriller about dark desire, obsession, and deceit. Molloy expertly turns the reader’s own prejudice on its head and plays with assumptions about gender roles and characteristics.

I sat down with Aimee Molloy for an interview and we talked about the pressures of a second novel after the success of her first, her writing process, toxic masculinity in literature and beyond, gender prejudice, and the current political climate.

After the huge success of your first novel, The Perfect Mother, which became a New York Times bestseller and is now being made into a film, how did it feel sitting down to write Goodnight Beautiful?

It was a lot of pressure. The Perfect Mother was really easy for me to write, I did it in a year and I really believed that nobody would ever read it. I enjoyed writing it with no expectations. With this book, I sold a version of it on a hundred pages, soon after The Perfect Mother came out and it had a different focus than the book it is now. But a month before that version of the book was due, I ended up calling my agent to say that I wanted to throw this away and change the focus. I had to renegotiate everything with the publisher and throw that book away and get their approval to start over. Not only was there this idea that people would probably read this novel, but there was also this pressure that I had sold it before I finished it. The Perfect Mother had been a very private experience but for Goodnight Beautiful, it became a much more public experience. If I write another book, I’ll try to mimic the experience of my first novel, in that nobody knows I’m writing it.

You started out writing non-fiction but recently have branched into novels. What was your way into writing and how did that transition come about?

I think deep down, I always wanted to write fiction. I wanted to be a novelist, but that seemed like such a lofty thing. My way into writing when I was young was probably through journalism and for many years I was a ghostwriter. I was writing books for famous people and they were putting their names on the cover and saying that they wrote it, which is, what happens in that part of publishing. But eventually, I didn’t enjoy the process as much because as I got older, It was harder for people to take credit for work that I had done. So I decided that it was now or never.

I once heard you say that before writing The Perfect Mother, you thought that the idea other Authors convey about the novel flowing out as if it was writing itself was crazy, but when you started writing it happened to you, and you found twists as you wrote. Was it the same with this novel?

No, it wasn’t so much so that I threw away an entire version of it! I ended up here, but it was much more work for me. With all the twists, it was too mathematical to be easy. You know, I think the plot is so tricky that it was, it felt like a lot of math. 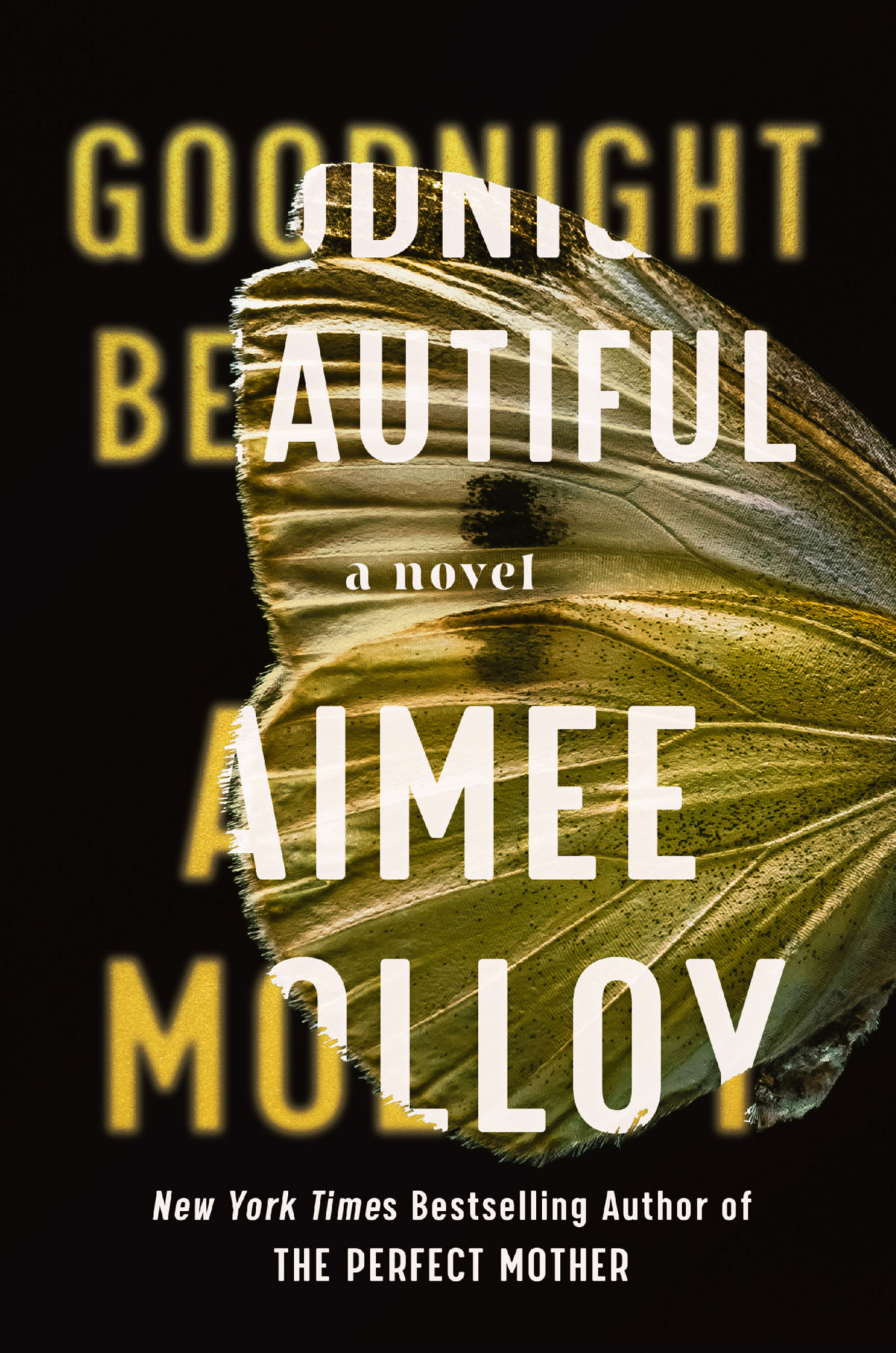 Goodnight Beautiful draws on a lot of parallels with Stephen Kings’ Misery. What drew you to this story and were you trying to recreate it through a feminists gaze?

I mean, hopefully! I don’t think that anyone else has such a fascinating character as Annie Wilkes, for many different feminist reasons, you know, she’s both like this motherless child and a childless mother and that’s part of what fuels her rage. In Misery, you don’t know if she wants to kill him or if she wants to mother him to death? I love Stephen King and that book was one of the first ‘grownup’ books that I read when I was little. And so, it has just stayed with me, it changed my whole world. But, I wasn’t trying to mimic Misery, because Stephen King, he’s so perfect that you can’t even attempt to. I did really want to just pay homage to him in this book.

I have this four-step process for writing. Get it down, get it straight, get it good, get it great.

At its core, I felt that the book worked as a mirror to force the reader to confront their own assumptions about gender roles and characteristics within ourselves and society. Why do you think that is so relevant today?

There was all this stuff that was happening at the time that I was writing this. At first, it was the MeToo movement. And then it was the child separation policy in the United States, where they were like ripping kids away from their parents at the Southern border. The violence against women right now… it’s been a hard couple of years about that you know? I can’t really articulate this, but it’s this idea that we’re all bringing these assumptions. I love thrillers and I was actually tired of this idea of another crazy woman, not just in literature, but in television too. So I thought, can I play with this idea, of challenging the reader’s assumptions? But I think at the core of the book is this idea of male toxicity and the way the males in the novel were raised by their fathers, and how these wounds impact them in different ways.

As you’ve said, there are lots of nods to the history of the unreliable female narrator. At one point in Goodnight Beautiful, Annie says about a novel she’s reading “Another unreliable narrator. I’m getting a little tired of the way women are depicted in fiction right now”, do you think this view of women is getting better?

I don’t know. I think that like everybody’s energy right now is into raising each other up. At least that’s what it feels like here. It’s like this movement that’s happening to make things better, together. It’s all kind of going to be decided on November 3rd, I think with what happens with this election. And I don’t know, I’m starting to read differently, and see a different representation of women. I’m reading much more outside the thrillers right now, like Sally Rooney, I think she’s incredible.

In both of your novels, there has been a focus on shifting perspectives. Why do you think that’s an important tool for psychological thrillers?

I think that that’s because it’s more about the plot. Even if you get into characters, you might not get into them as deeply because it’s more story-driven. So I think this ability to move quickly and see everybody’s point of view, is necessary for this genre. I’ve been thinking about trying a book that actually is just a singular point of view, which I haven’t tried before. I’ve been playing with it and reading novels with a singular point of view more. I think it’s a different process to get into a character than to be story-driven.

So what was your inspiration for branching into the thriller genre?

It’s so cliche, but it really was Gone Girl. When I read that, I was in this long-term reading slump probably because I had little kids, but then I picked up Gone Girl and I hadn’t really read many books like that. My dad is a huge crime reader and he’s always trying to get me into it, but I literally wouldn’t ever read what he recommended. But then I picked up Gone Girl. I devoured that book, I thought it was so smart. I had had this prejudice against this genre, but then that book opened up this whole new reading world and I was like, Oh, I want to try and do that. I want to try and tell a story like that.

What advice do you have for aspiring writers and what does your writing process entail?

I have this four-step process for writing. Get it down, get it straight, get it good, get it great. This goes back to Anne Lamott’s Shitty First Drafts, just keep writing, do not worry about anything, just keep writing. And eventually, you will have enough that you can look at it and be like, okay, now how do I get this straight? And then that’s when you start to fix the problems and the plot things, and then you can worry about getting it good. But it’s only on draft number four that you’re anywhere close to worrying about who you are as a writer and like how you sound. You have to strip yourself of all of the judgment. I’ve never taken one writing class, I would love to, I’m sure they’re great, but you don’t have to. You just have to sit down and keep writing every single day for even just 20 minutes. You just can’t quit, because it’s super hard.

Do you have plans for another book or are you taking a break?

Yeah, but I’m hoping to approach it in a much different way. I want to have more space to do it. So, I’m just kind of going to go very slow with it and I want it to be a very character-driven, one point of view-book. I promised myself that I won’t write until I have like 40 pages about my main character, and I really understand her before I get into the story part of it. But it’s still thriller-ish, but more a political dystopia. I guess, like our real world right now.

8 Self-Care Habits to Master in Your Twenties

10 Ways to Get Over Your Winter Sadness and Moodiness