Doing what you love is an act of courage and bravery. More often than not, it means leading with your heart instead of your brain. It means paving your own path despite all the odds and uncertainties. Sometimes, it even means committing to your vision when no one else may see it.

With a surname like Guerreiro, “warrior” in Portuguese, it’s no surprise that this Mozambican musician gracefully embodies the strength required to pursue his passion and lead with his heart.

While binge-watching Youtube videos one afternoon, I came across an acoustic collaboration of Deltino Guerreiro and Joss Stone singing his original song, Sonho. I was enamored by his soulful traditional Mozambican sounds and his down to earth lyrics. I’m a sucker for lyrics that tell a raw and honest story! I was curious to learn more and reached out to Deltino to talk about his music and what it means to be a creative in his country.

Tell us about yourself. How did your relationship with music start?

My name is Deltino Jaime Albino Guerreiro, I am a musician and economist, and I was born in Montepuez, Mozambique on the 26th of August, 1990. I was raised by my grandfather and grandmother. My relationship with music started since I was a child, as my grandfather told me.

How would you describe your music?

My music is a mix of influences and the fruit of my experiences from the north to the south of my country. From soul and R&B to the tradition of northern Mozambique, allied to conscious lyrics sung in Portuguese, English, and Macao, my melodies reflect the strong Arab musical influence of the north of Mozambique.

Which of your songs are you most proud of? Why?

I am proud of “Sonho” because it gave me visibility and respect.

How much time do you dedicate to your music?

For now, I dedicate all my time to my music.

“music is an ocean of emotions”

Some people avoid turning their creative passions into a profession out of fear of spoiling it. Have you ever had the same fear?

I never had that fear, because since I realized that this is my passion, I decided to work hard for it and never give up. Love is the main reason why I make music.

What does music mean to you?

For me, music is an ocean of emotions.

Your song “Sonho” tells the story of your dreams of achieving fame and success – and the struggles to make those dreams come true in your country. Can you tell us more about that?

My dream is not to achieve fame. Fame can be the consequence of success as money can be a consequence of work. The thing is that everybody wants to be rich. Some may say no, but most of us want to travel, want to buy a good car and even have a good wife. Tell me, is this possible these days without a lot of money?

The song “Sonho” describes the dream of many people or maybe everybody. In my country, every young man wishes to have a good house, good car, travel around the world to Paris, Brazil, and etcetera, but then the minimum salary is too low to achieve such dreams, but the good thing is that they never stop dreaming, believing that it’s possible. Even those who don’t have a job want to have a nice car, house, and good shoes.

So, in some way or another, everybody wants to be rich.

“Love is the main reason why I make music”

What advice do you have for other creatives in your country, Mozambique?

The advice I have for other creatives in my country is: the love and passion must be the main reason for why you do what you do.

Since you released your album Eparaka in 2016, do you think your music has evolved over the years? How so?

Sure. I have been investigating and listening to different musicians and rhythms and especially with the shows I have been doing. I was capable of knowing what people loved most about EPARAKA and also the criticism I have received made me work more on some points.

Do you enjoy performing live? Which show has been your favorite so far? And why?

I love to perform live since I know myself as a musician. My favorite show was the one I did at CCFM (Centro Cultural Franco Mocambicano). This show was special because I decided to remove the keys from my band and added traditional percussion.

When you performed at Kongoloti Live Sessions, the crowd sang along to your lyrics! When that happens, how does it feel?

It was a great moment for sure, and it feels so good to know that people love your music.

Do you have any goals for your music endeavors for this year? (Maybe perform in Europe?!)

Yes, I do, and touring in Europe is one of them. My second goal is to produce my second album.

How do you want to be remembered as an artist?

As an icon musician in my country and Africa, who did his best to represent his origins of the north of Mozambique. To be remembered as a good man would be great. 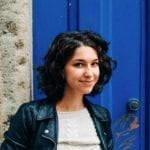 Daniela is a digital marketing freak, hardcore foodie and language junkie from Toronto, Canada. Her writing can best be described as outspoken, never poetic and always looking for capital-T Truth. You can find her in no-frills bars and cafés debating and chatting with strangers.