On cycle 24 of America’s Next Top Model, Rio Summers quickly stood out as season favorite with a unique look and a captivating presence that kept the judges on their toes. Since exiting the show on the top 4 spot, Summers remains a season and show favorite and continues to make a name for herself in the modeling industry. With a just-released modeling book and many more new projects in the works, we interviewed her to get a peek into her world post ANTM!

You made it to Top 4 on America’s Next Top Model Cycle 24! What was the experience like being on the show and being one of the top contenders?

The experience of being on ANTM is one of a kind. I learned a lot about myself. My strengths, my weaknesses and how to be around other types of people who may or may not mesh with me. I got to work with iconic photographers, models, and celebrities that people admire worldwide (for good reason too). I wore beautiful and expensive clothes and shoes that I didn’t have access to before the show. In the end, I was so proud of myself for making it in the Top 4/5 (whatever) because I put a lot of myself into that project. It was hard work.

What inspired you to go on ANTM?

I watched ANTM as a child with my mother. She actually loved it, and in turn, I did too. I thought Tyra was so generous and revolutionary for starting a platform for girls to become industry-working models. So when the opportunity fully presented itself for Cycle 24, I said ‘lets see how far I can take this.’ I also wanted to talk about my Trichotillomania because a lot of people quietly suffer with it and I thought as a model I could be an inspiration.

While on the ANTM you mentioned many times that you had a rough journey getting to where you are now, can you talk a bit about that?

Well, I’ve been homeless several times throughout life, and my last dealing with that was in 2013. I had a single mother, and though there were some extremely hard times where she was getting little to no support trying to raise three children, there was NEVER a shortage of love. I worked in some night clubs from 18-21 where I saw some pretty shady things. In August 2013, I was diagnosed with a golf ball sized brain tumor in the back of my head. It quickly became an emergency. They told my mother that an emergency surgery would need to be performed and they’d be bringing one of the best neurosurgeons in to operate. My heart rate was 35 bpm the day before my surgery. Even though nobody would tell me, I knew I was dying. I felt it. I knew the surgery was incredibly high risk, (think red wire/blue wire) and I most likely would pass away. The surgery took 12 hours and was successful. They said they’ve never seen someone recover so fast. I was a miracle. Six months after in 2014 I moved to LA. Almost immediately I was taken advantage of by an older well-known photographer. I was 20, eager to become known, to be successful. Of course, he saw that and was able to masterfully manipulate me. You know the whole “I can make you a star, look at all of the people I know. Stick with me you’ll be huge.” speech. Ladies and gentlemen, please be careful because I honestly thought I was too smart, too prepared for it. I wasn’t. 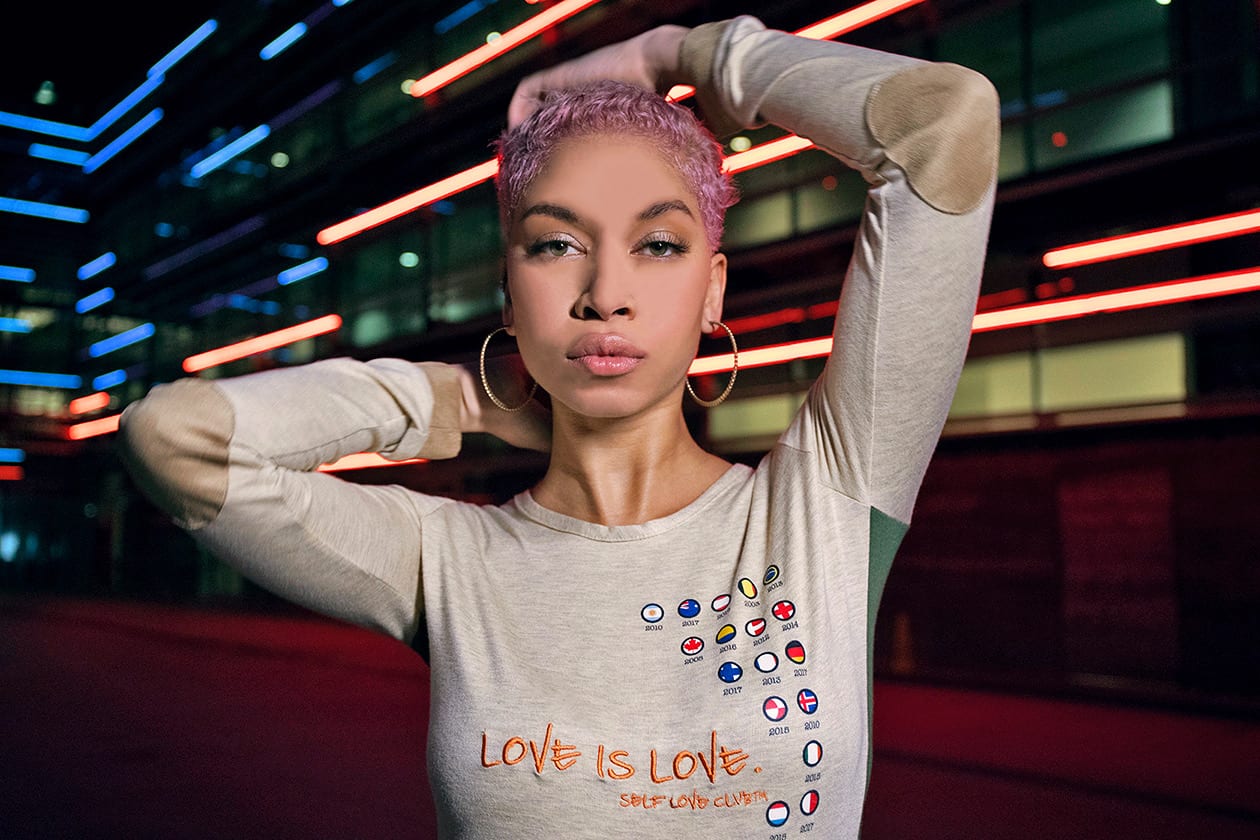 My courage comes from the fact that I know I’m worthy of being in my position and that there’s ONLY one me.

A few months after that incident, memories began coming back from an inappropriate exchange between my 6-year-old self and a teenaged boy. I had to buckle down and work through both events. Since I wore wigs for a large portion of my life to hide the bald spots I had given myself with my Trichotillomania, trying to get signed in LA at first was basically impossible. Agencies wanted to see my real hair and wanted me to lose 15-20 pounds (I was 5’10 and 145 tops). I went to Ford and didn’t hear back after what I thought was an amazing interview, I decided it was time to lose some weight, cut my hair off and go from there. Clean slate. It was the start of a whole new era.

Where do you draw inspiration or courage from when you model?

My courage comes from the fact that I know I’m worthy of being in my position and that there’s ONLY one me. That there’s something unique that only I can bring to the table and that relaxes me. I draw inspiration from Pinterest and what I see on IG. Models like Grace Jones, Naomi Campbell and of course Tyra Banks. Lady Gaga is definitely an idol of mine too; she’s incredibly creative and talented. 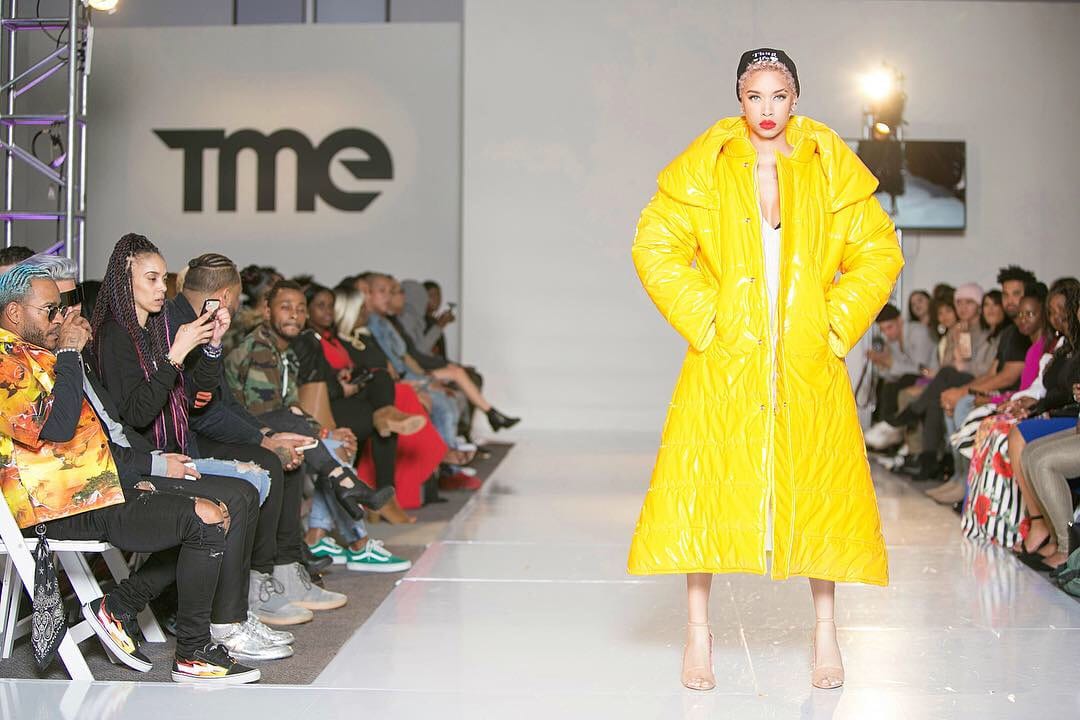 What advice would you give anyone who would like to be a model?

If you want to be a model you need to understand that as glamorous as it looks, it’s seriously hard work. Anyone can take a nice photograph. It’s much more than that. There are many layers to modeling, so if one area doesn’t work out for you, maybe there’s another where you’ll not only find success but more happiness too.

What projects are you currently working on?

Right now I’m working on the release date of my very first book, “Posing 101”. It will be available in March 2019. It’s a guide to posing, and helpful do’s and don’ts for models or anyone on camera. My Youtube channel “All Eyes on Ri” will be up in March as well. It will focus on my skin care regimen, my day-to-day life as a model, my struggles and accomplishments with Trich. I’m also looking to begin traveling as a model. I’d LOVE to sign to an agency in South Africa. I’m still ruling the runway as a model coach for The Model Experience too.

There are many layers to modeling, so if one area doesn’t work out for you, maybe there’s another where you’ll not only find success but more happiness too.

Any favorite quotes or books that have impacted you positively?

Richard Branson’s book “Screw It, Let’s Do It” inspires me to no end in any area of my life. Ashley Graham gave me a signed copy of her book “A New Model,” and it really helped me feel more secure in myself as a model and person. My favorite quote is from Stefani Germanotta (Lady GaGa) and it goes “I used to walk down the street like I was a fu*king star. I want people to walk around delusional about how great they can be – and then fight so hard for it every day that the lie becomes the truth.” 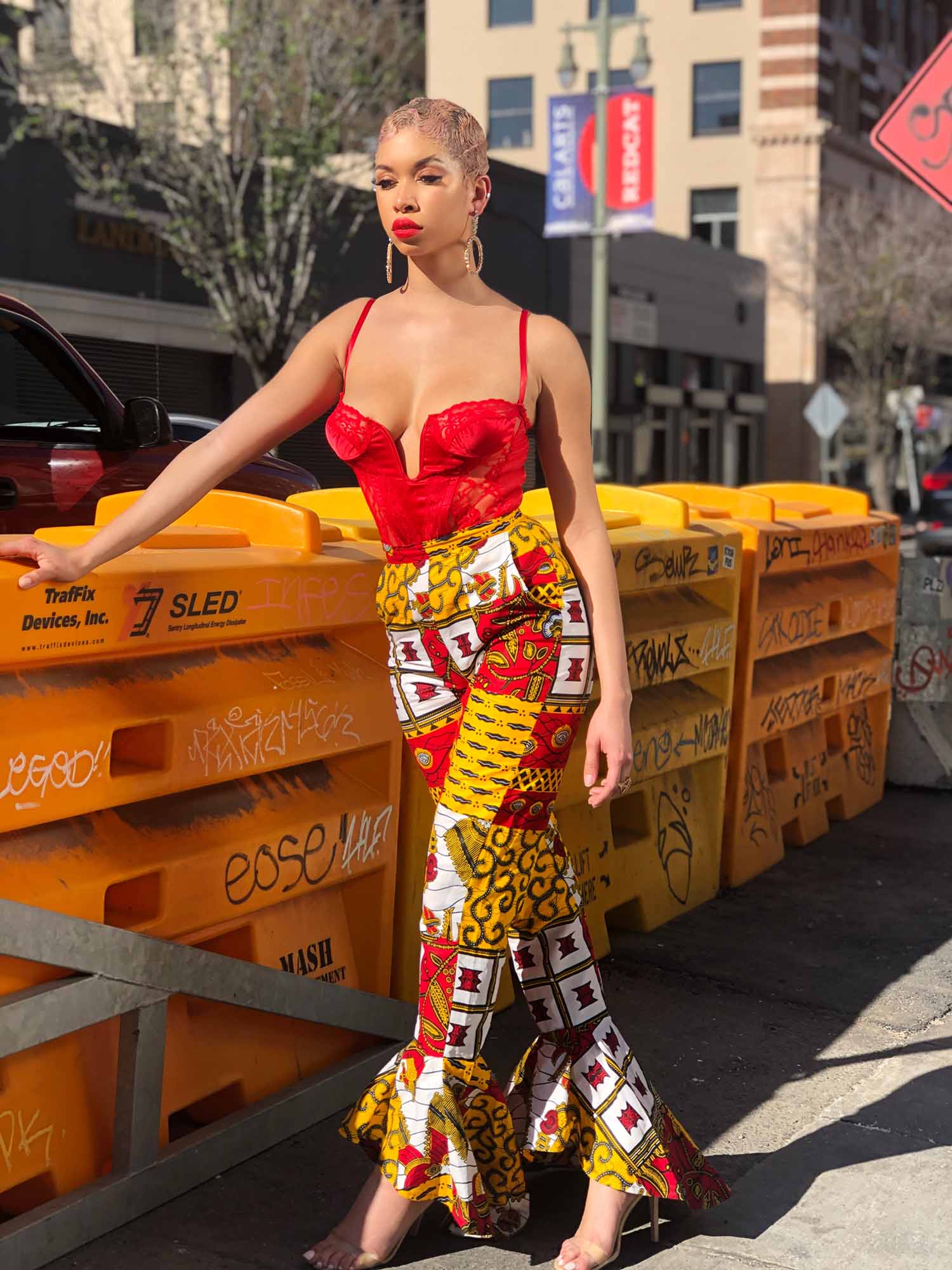 In one word how would you describe your experience on top model?

In one word: Altering

Who is your fashion icon?

It’s definitely a tie between Cher and Kendall Jenner.

What are 3 fashion and 3 beauty essentials you can’t do without?

My fashion 3 essentials would be a leather jacket, high waisted skinny jeans, and a black turtleneck. My 3 beauty essentials are Olay SPF 15 moisturizer, Pacifica Black Mascara, and concealer. 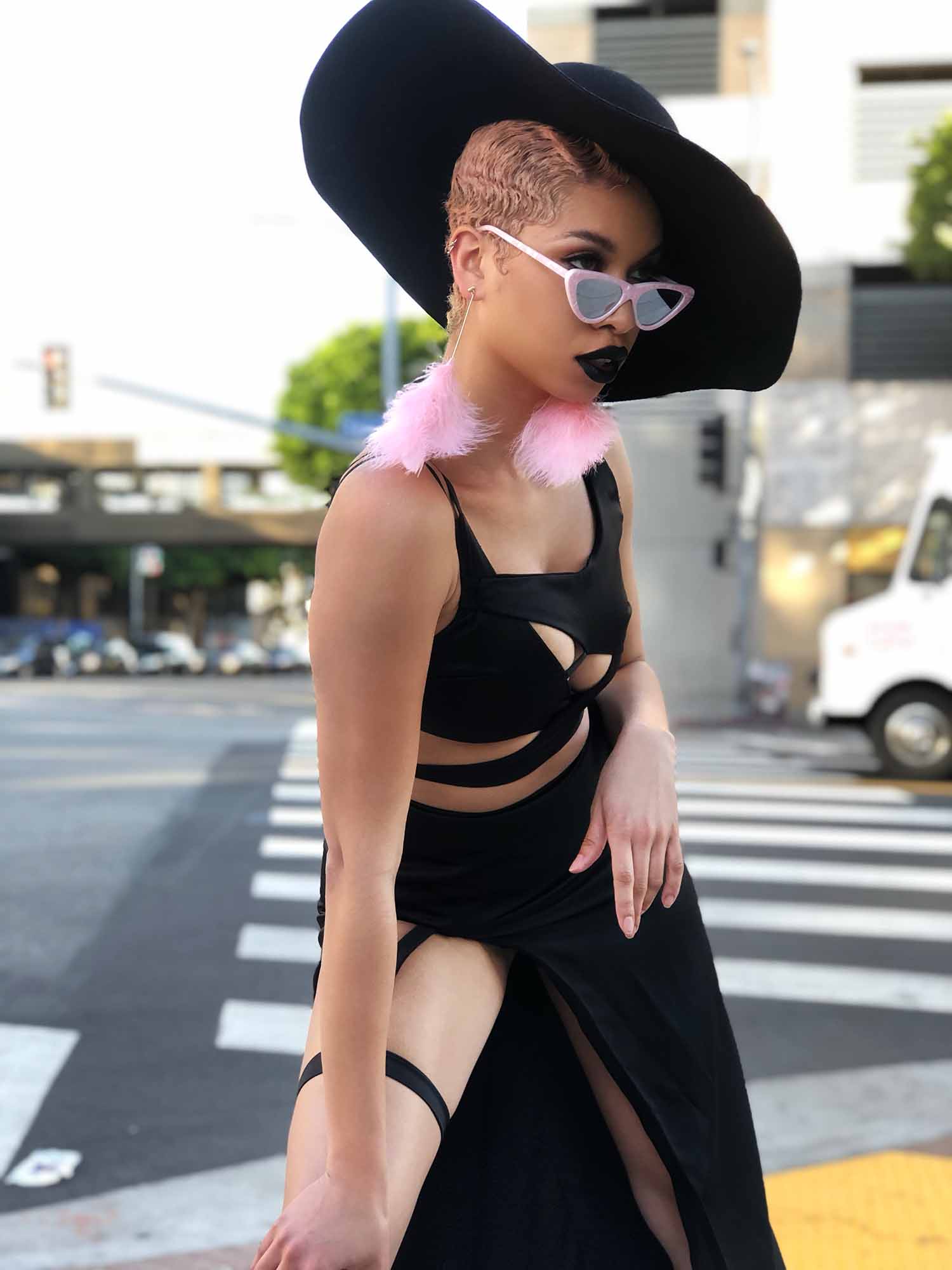 At Clever-ish we write about Quarter-life crisis that Millenials go through. Have you ever gone through a quarter-life experience? If yes, how did you overcome it?

As a millennial, I understand the quarter-life-crisis. I’ve been 25 for about 90 days, but I’ve already thought ‘Are you really living up to your expectations?! BUT LOOK AT _______ WHY AREN’T YOU THERE TOO! YOU’RE ALMOST 30 WTF!’ That insecurity of ‘Am I doing something wrong?’ ‘Why isn’t it ME making that kind of money?’ When you see 19-year-olds making more money than you, it can be discouraging, to say the least. Comparing yourself to anyone else is pointless and detrimental; this is YOUR journey. What has always pulled me out of the hole was realizing my life is a day-to-day process. You can’t receive blessings if you’re not ready. I trust my faith which in turn makes me trust myself. Life is a learning journey; there is no wrong answer. Just keep working to be your best. To fulfill those goals in a dignified way.

Jiji is a writer and self-acclaimed creative enthusiast. Her writing can be best described as heartfelt creative non-fiction. She writes opinion essays on social issues, current affairs, and her on-going quarter-life crisis. She has an MBA degree, a knack for entrepreneurship, and a love for Coffee and Chocolate desserts.

How Successful Is The Dirty John Miniseries Compared To The Podcast?

Aaron Jean – Not Your Everyday Photographer

“Get a Life, Chloe Brown”- An Interview With Author Talia Hibbert