The Summer had me at goodbye. I lost a lover, gained a listening ear, and went on an ungodly sexual adventure. And as in general life, I became passing friends with heartbroken men, my bar-slab comrades, a fraternity of exes. This is a hands-down compilation of barstool quotes, passive-aggressive stories, bourbon speeches from the destroyed souls of recently heartbroken men crying in their beers. I spent all summer being an excellent sidekick, wingman, confessor – or in some cases, eavesdropper extraordinaire – taking mental notes of the whiskey wisdom of young men who just got dumped for better.

As it turns out summer is an excellent time to call it quits. The sun is high and out, good-looking people abound, fleeting sexuality is trending, and the air is thick with that Gatsby kind of confidence. Summer becomes the time to move on to better, to be better, to do better, and to let go of stale, old loves that have used up their magic and muse. It is a time when endings begin with ‘We need to talk’. ‘It’s not you, it’s me’, Etcetera. I spent last summer doing what lovelorn writers do in bars, around newly heartbroken gentlemen, I spent all night, listening.

(Numbered, but not ranked; here are some paraphrased words of wisdom from belittled, heartbroken men.)

1. “Marriage is a permanent sickness; you are sickest at the start.” – From a garden-fresh divorcee sworn off marriage, part 1.

2. “There would always be a better-looking woman. Especially on your wife’s bridal train.” – From a garden-fresh divorcee sworn off marriage, part 2.

3. “Love is not a light switch you flick on and off at will.” – From a man whose childhood lover found another brotha.

4. “Never make kids in the first year of anything.” – From a scorned man paying child support and still paying.

5. “Love at first sight is such a terribly French thing.” – From a man who read the signs wrong. I call him Sleepless in the Friend Zone.

6. “If at first, it doesn’t work out, take a hint.” – From a man who met his crush and an unrequited love. Never, ever meet your crush.

7. “You love better when you love yourself enough.” – This one is a favorite cliché. It is also, decidedly, sad.

8. “Younger lovers make great conversationalists, but terrible spouses.” – From an old man and his juvenile lover. She was 19 going on 19.

10. “Learn to make at least one decent cocktail from scratch.” – From a 23-year-old who liked his Cherry Martini strawless, part 2.

11. “Own five great pickup lines, and then five follow-up lines for each possible scenario. You should also be gracious if you are politely asked to ‘Fuck off.” – From a self-acclaimed Casanova, part 1.

12. “The worst response to a cheesy pick-up line could be a loud ‘Not a Chance, Buster’, she can never climb a barstool fast enough to empty a Moscow mule on your head. Can she?” – From a self-acclaimed Casanova, part 2.

13. “Always remember the first three months! They are excellent.” – From a guy whose friendship mattered to me. Still does.

14. “Always carry a slightly bigger condom. Like a Tinder account, it keeps you hopeful, in its existence and size.” – From a guy who knew how to make the ladies laugh. He was the proud owner of three gently worn condoms.

15. “Women always climax in movies, not so much on paper. Make movies.” – The antithesis to Netflix & Chill, part 1.

16. “Seek to outdo the last and next guy in the matters of lovemaking.” – The antithesis to Netflix & Chill, part 2.

17. “If you were ever heartbroken, there would never be another like her. Settle for less.” – From the one who gave up hope, and settled for less, part 1.

19. “There will be a million soulmates only too good for you.” – From the one who gave up hope, and settled for less, part 3.

20. “Soulmatery is a matter of geographical convenience. Ever seen the women in Ethiopia?” – From a black immigrant man rejected by a white southern lover.

21. “Low self-esteem makes loyal lovers; you don’t have to be a jerk about it.” – From a guy who could not rely on his looks.

22. “Never take her virginity, knowingly, if you are not prepared to lead by heartstrings forever and show your victim some heaven.” – From a hopeless romantic who did the right thing.

23. “Heartbreaks bring wisdom and are therapeutic; they are as useful as vaccines.” – From a med student who lost at love, but won at life.

24. “Treat every kind of woman like the best side of a banana fudge cake.” – From a man with a sweet tooth and a healthy appetite.

25. “Never ever forgive a cheating lover.” – Truer words have never been so painfully incoherent.

26. “Every beautiful girl has become another man’s peeve, and he didn’t have any bigger balls.” – Hell hath no fury like a lover scorned – twice.

27. “You would never find any woman like your mother, this is deliberately designed.” – From a mommy’s boy. He would spend his summer jumping obstacles.

28. “Your ex knows where the skeletons are buried, embrace peace.” – From a man with something to lose, again, part 1.

29. “Never leave a paper trail or text message, they can start fires.” – From a man with something to lose, again, part 2.

30. “Find an acceptable lover from anywhere, even from Luhansk, with nice feet and love her tremendously for her nice feet.” – From a man with a protracted foot fetish.

31. “Saying that ‘Beauty is skin deep’ should be your last resort in any argument.” – From a man who knows, part 1.

32. “A beautiful woman has already been told she is beautiful a million times today, get creative.” – From a man who knows, part 2.

33. “Hunt down a couple that seems normal enough, ask them very tough questions.” – From a man looking for a Sensei.

34. “Everyone deserves to be loved, but not everyone could use it now.” – From a man who drank whiskey and Coke, and did not give a shit.

35. “But for the technicality of tying a man up in the basement and poking him with twigs, marriage should confer equality between partners. Your mom let your dad steer the boat, look where it got them.” – From a man over-compensating for an obsessive-compulsive knack.

Read other pieces from Chuka

This article was originally published on November 1, 2017. 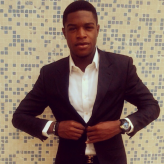 Novelist, poet, nonfiction and short story writer, academic – Chuka Emezue’s radically diverse writings explore themes including: Immigration, black consciousness, mental health, racism, dirty realism, fatherhood, and masculinity. He is currently working on his debut novel: ‘The Things That Tickle God’ - to capture the satirical investigations of a young Schizophrenic on an expedition to find God and self. Read his work at www.plainblacktees.com

20 Quotes To Give You Courage And Face Your Fears

5 Reasons Why You Should Stop Comparing Yourself With Your Peers

7 Key Lessons on Life, Love and Career from Michelle Obama