On a warm summer morning, CJ walked into the tiny cafe on a cute little street in the center of Madrid, Spain. Sporting a sharp fade with dreadlocks falling freely to his face and a gym bag in hand, for many reasons, it’s easy to see that CJ is American. He spoke to me in English with the most American accent but then he walked up to the counter and in perfect Spanish and Spanish accent ordered a cup of tea.

This delicate yet effortless balance of duality is a theme that popped up repeatedly in CJ’s story as we chatted about his journey as an artist. As a Madrid based American rapper who goes by the stage name Brotha CJ, he describes himself as “If Marvin Gay was a rapper, that’s me.” During our interview we talked about the evolving identity of his music, his sources of inspiration and what it’s like to be an artist in an international environment. He also shared with me, his many unique perspectives on creating music and growing as an artist. Read the interview below.

How long have you been doing music?

I started doing music initially as a joke. My friends and I had a band called Oreo- because we were two black dudes and a white guy. Then I started making more songs and decided to get serious and now I’ve been rapping for 10 years.

What were you doing before you got into music?

I was doing the last I ever thought I would be doing in my life. I moved to New York City after college and I had a week to find a job or leave New York City. I ended up getting a job at Fox News. I worked at Fox for three months and I used that time to save money to move to Spain. I’ve definitely didn’t want to stay at Fox News. They gave me a 3-month contract but paid me by the hour and poorly. After the three-month contract was over they wanted me to come into a full-time position but I turned it down and moved to Spain instead. I’m from South Jersey and I’ve been living in Madrid so long that now whenever I go back to the US I feel out of place.

Have you been doing music the whole time you’ve been living in Madrid?

When I first got to Madrid, I stopped doing music. Then I got an opportunity to perform at a showcase and from there I met other people in the music scene. Before that, I didn’t really think my music career was going to go anywhere or that I would do it seriously.

So when did you start to take Music seriously?

There are two levels to that. At one point I was in a rap duo called Bosa Silva with my good friend Adam who’s from London. We would sit for three days at a time just making music and I would teach him how to rap. I was really shy back then so I preferred to have a friend on stage with me. After a while, we decided to take singing lessons. There I met my singing coach Erin who told me, “if you want to be a musician, you have to hang around other musicians.” So at that point, I started looking for a band and then once I had a band, I found a different feeling for music that I had never had before.

So are you doing music full-time now?

I wish I was but no. I have a lot of friends who are and I’m so jealous. I teach English and I also do video and then music stuff.

You do video?! Tell me more about that.

I see video, music, and angles as storytelling. I studied Journalism for TV and I really liked editing and had the experience from highschool. This summer I focused on filming a video a day because I’m preparing myself to direct my next music video.

Do you think your creativity with video feeds into your music or the other way around?

Definitely. Video is a big part of how I make music and how I write songs. When I’m writing songs I think of the video. I’m a very visual person. I have very vivid dreams and I try to make my music reflect that. So I like to write when I wake up before I pick up my phone or any electronic device because the minute you do, you start to forget your dreams and inspiration.

Besides your vivid dreams, what other ways do you get inspired for your music and your creativity in general?

I like listening to chord progressions and the emotions they create because they inspire me. I tend to make music first with the keys and a guitar then I’ll freestyle and my producer takes the best parts. I don’t write a lot because I’m dyslexic so it makes it hard for me to read the lyrics. I write the rhythm of the rap and the melody and then I put words in later. It took me a long time to learn how to do that.

“I have so much faith in art being positive but it can still be healing when it’s dark.”

How do you grow and evolve as an artist?

I’m very critical of myself but I like that because I think that’s what gets me to keep going. I was very arrhythmic as a teenager – I could not dance. So rapping was my thing and I kept pushing myself and my friends helped push me along too. I’m definitely proud of where I am at now, but I still have that instinct to keep pushing and improving. For example, I have a song that’s really popular but I don’t like it. It has about 700 thousand plays on Spotify but I still think “I could have done this better”. I wrote the song when I was in a dark place but I’m usually a more upright and colorful person so the song is not really myself and I wonder how it’s the song that most people like. I have so much faith in art being positive but it can still be healing when it’s dark. 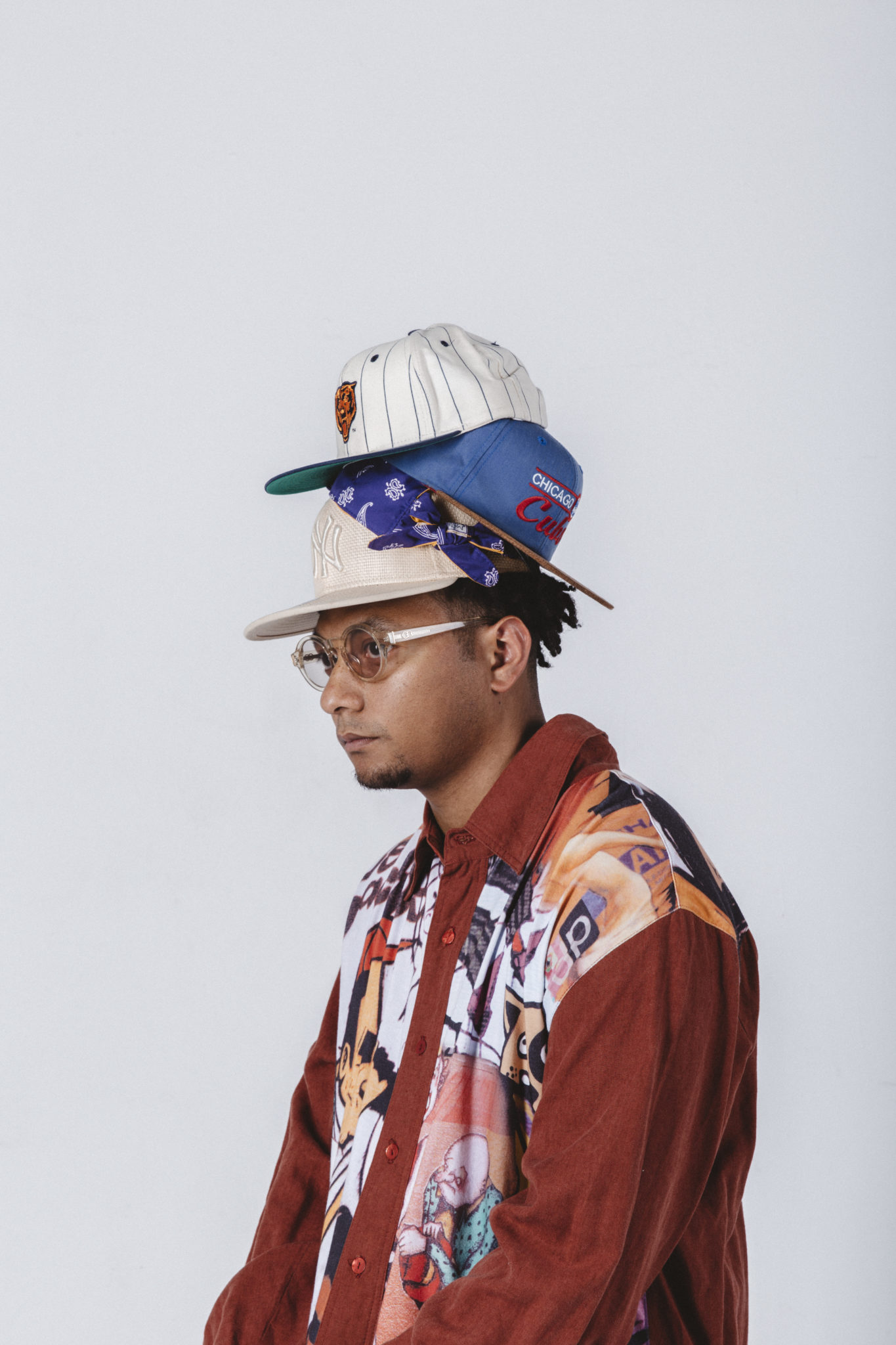 My dad has a bunch of vinyl records and I grew up listening to old school funk music and RnB and Soul. So I write my lyrics like how an RnB singer from that time period will write rap. I love listening to trap and party music but as an artist, the message I want to get across with my music is the same feeling of the black struggle and artistic discovery that people go through. Like in the 70s everyone got new instruments and sounds and black people had enough money to produce their own music and really tell their story. That’s what I mean by that quote. Sonically I’m also quite flexible. I can switch from soulful sound to electronic. Right now I’m working on a project with Flamenco and the Spanish Guitar. I don’t like doing the same sound over and over again.

What has been the difference between being a creative and musician in Madrid vs in New York?

In the states, I had this weird concept of who I had to be. I grew up in a white town and I was the only black kid. So I had this concept of being black and then all of a sudden when I was in seventh grade, a bunch of black people moved to my town and then I became the white black kid. Then when I got to college in Syracuse, New York, I didn’t really know where I fit in but luckily I ended up having a friend group that was really diverse. I tried to make my rap music about my life like girls and heartbreak and my experiences because I felt no one would take me seriously if I rapped about typical stuff.

Being in Madrid as an immigrant, no one has any expectations about you so I grew as a person because I didn’t feel the pressure to act a certain way or be a certain person. I became more confident and more willing to experiment and more fearless.

Speaking of fear, what is your biggest creative fear?

My creative fear is letting down the people who put so much time and effort into my work. I have at least 20 friends who invest their own time into me as an artist. My best friend Ken sometimes puts more work in than I do. He listens to every beat and handles all the emails and business stuff. Frank plays the keys but he’s also the voice of reason.  My friend James and my roommate Ryan both do photography and videography as well. My friend Chris helps me write all the ideas and track what we’re working on. I mean the list goes on. There are the producers and the people that show up to shows to help coordinate. People who actually believe in what I do. The worst thing to do would be to let them down.

I was working out for the first time in a long time and I was doing a set of exercises for every person in the band. We had seven people in the band plus me so I was doing eight sets. They keep me motivated because I don’t think I’ll even want to do it without them. So my biggest fear is letting my friends down.

Are you creatively satisfied?

I would say I’m learning to be creatively satisfied. I’ve come to realize that “doing the creative thing” takes a lot of energy – emotional energy, mental energy, and physical energy. I’ve had weeks where I didn’t sleep and I’m going from meeting to meeting. And eventually, you start to become very insecure again because you’re trying to push yourself as a product and you’re trying to get people to come to your show. You get a kind of insecurity where your numbers mean something to you. So this summer I decided to take a deep breath. I decided I’m not going to actually make too much music but rather focus on getting back in shape with my health and working on a different art form. If you burn yourself out you can’t enjoy it anymore. So I’m learning to be creatively satisfied.